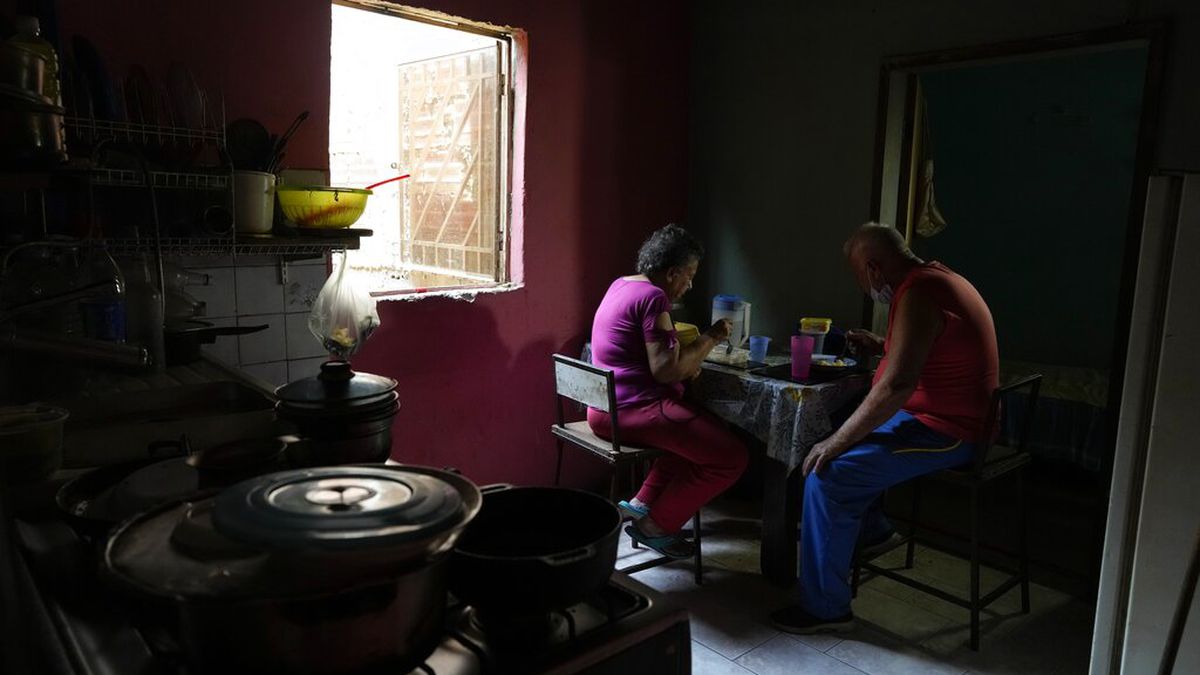 Pension hike not enough for Venezuelans to afford basic food

At lunchtime, Maybel Sequera and Juan González share a plate of noodles and beans at their home in a popular neighborhood west of the Venezuelan capital. Their meager lunch was a gift from a non-profit organization as the couple cannot afford food.

Sequera, 72, and González, 74, worked for years as a seamstress and driver to build their two homes and raise their four children. But now, after 50 years of marriage, they rely on donations for food, medicine and clothing.

The government increased their combined monthly pensions from about $4 to about $60 last month. But it would have to be multiplied by six for them to be able to buy a basket of goods.

“Now that they have increased us to 130 (each), we will see how we manage with this 130 because it is not enough either,” Sequera said, referring to the pension in bolívares, the official currency. of Venezuela and in which pensions are paid. .

In Venezuela, the pension is the amount paid monthly to workers who retire after reaching 750 weeks of social security contributions and reaching the age of 55 for women and 60 for men.

Since 1995 – years before Hugo Chavez imposed what he saw as socialism in this South American country – a pension has been equal to the monthly minimum wage. Workers contribute between 2% and 4% of their wages to social security, while employers pay an additional 9% to 11% on behalf of workers.

The pensions of Sequera, González and millions of other pensioners in the same situation rose last month because President Nicolás Maduro raised the monthly minimum wage from about $2 to about $30, an amount insufficient to pay the basic goods, the cost of which in February was estimated at $365, according to the Venezuelan Finance Observatory, an organization specializing in economic studies.

Venezuela has just over five million retirees, according to official figures. Annual inflation, which slowed last year but still reached 686.4%, has been eating into their pensions for years.

Although the country experienced a severe shortage of food and hygiene products in the second half of the last decade, prompting people to line up outside supermarkets to buy whatever they could, store shelves are now well stocked and display imported products. But the high prices set in dollars prevent a large part of the population from buying goods.

This dynamic leaves many older people dependent on remittances from the more than six million Venezuelans who have emigrated due to the economic, political and social crises of recent years.

Non-profit organizations and churches fill some of the gaps, but it’s not uncommon to see older people on the sidewalks of Caracas, the capital, selling candy or begging for money.

“I have to manage to get food. It’s not easy, because you’re an age, you go out in the street and a lot of people look at you with contempt,” Miriam Jiménez, 68, told The Associated Press after picking up a plate of food from a soup kitchen for the elderly in western Caracas. “You have to beg in the streets. Sometimes a neighbor gives me something.

Luis Francisco Cabeza, director of Convite, a nongovernmental organization focused on elderly care in Venezuela, said social security for the elderly should not be just a pension. He said this should also include access to medicine, medical care and recreation.

“The pension is a system that aims to protect you against the possibility of reaching old age,” he added. In Venezuela, the hospital system is precarious, so patients must bring all the medical supplies to be treated.

Sequera was diagnosed with two types of cancer this year, including a type of skin cancer that required facial surgery. To pay for medical supplies, she sold two of her three sewing machines, which she used to mend neighbors’ clothes in exchange for cash.

Pensioners demonstrated dozens of times across the country last year. During protests in the capital, some could be seen wearing broken shoes and threadbare clothes.

Sequera and González had a cup of coffee after finishing the plate of noodles and beans for lunch.

“Today (at breakfast) we ate the last little egg. We will wait for another blessing to happen there,” González said.

“For the night, God will provide,” his wife interjected. “And if not, a glass of water and go to sleep,” González lamented.

Deadline to apply for Guaranteed Income stimulus checks is next week

BEL recruits engineering interns with a maximum salary of ₹90,000 per month