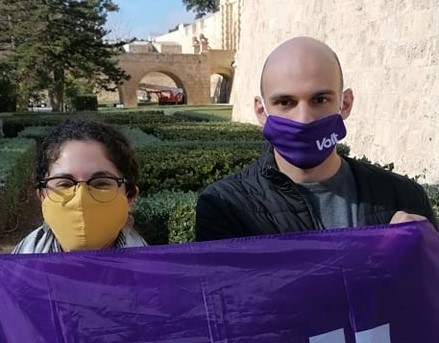 The election expenses of the progressive Volt Malta party and its two candidates in last month’s elections amounted to €1,042.64.

In a statement, the party unveiled its expenses, which include the personal living expenses of its two candidates Alexia DeBono and Kassandra Mallia.

This came as the Electoral Commission yesterday reminded parliamentary candidates who have not yet submitted their affidavit of election campaign income and expenses that they have until Monday May 2, 2022 to do it.

General election contestants are legally required to submit their income and expense reports to the Electoral Commission and cannot spend more than €20,000 for each constituency they contest.

Curiously, the Volt Malta contestants listed their personal expenses, with DeBono spending €265.42 on groceries, takeaway and coffee and €79.50 on taxis and fuel.

The youngest MP ever spent €600 on his election campaign

Both candidates also included the €180 registration fee to contest the election, €90 per contested constituency. If a candidate is elected or obtains 2% of the votes cast in the constituency, these costs are reimbursed, but none of the Volt Malta candidates are eligible for reimbursement.

So far, independent candidate Arnold Cassola and opposition MP Eve Borg Bonello are the only candidates to have published their campaign expenses.

A day after the March 26 election, Cassola posted his campaign spending on his Web pageshowing that he spent €3,283.29, his biggest expense being postage.

She spent €256.40 on Facebook advertising, €200 on business cards and €50 on stationery. Additionally, she received a €100 donation for branded pens and a banner used for her pop-up office.

BE THE FIRST TO RECEIVE THE LATEST NEWS

What to expect if you are considering buying an investment property